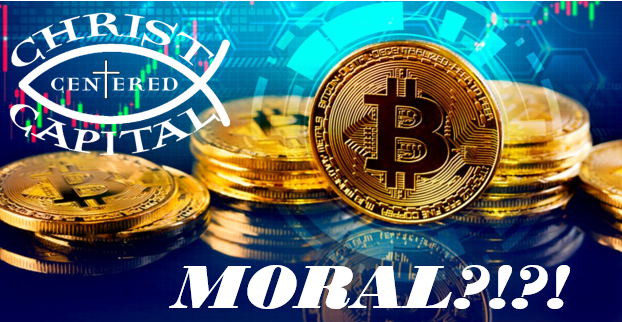 The title question of this post has a complicated answer. Entire books could be written about the subject and not cover the full gamut of all the question entails. C3 is not an academic, theological, or apologetic site, rather, C3 is a site that hopes to shine light on the moral culpability that comes with investing by providing brief and digestible information that helps the Christian person become more informed about what their capital is funding and promoting when it is used to invest. C3 hopes and prays it can be a benefit to people of faith, but it does not claim any moral authority on what is good and what is evil, C3 leaves that to the Church, the Bible, and our Lord. Below are some OPINIONS on the morality behind Cryptocurrencies, primarily focused on Bitcoin.

The above articles and videos are neither staunchly against Crypto nor are they fan boys for the new form of currency. There are positives and negatives to Crypto when we start to talk about morality. Let’s first tackle the negatives. (The remainder of this article will be focused on Bitcoin – BTC)

It takes a huge amount of Energy to mine and authorize transactions of Cryptocurrencies (Well at least Bitcoin). BTC mining consumes around 91 terawatt-hours of electricity annually as of 9/6/21. That is about .5% of all globally used electricity and it is seven times the electricity used by Googles global operations. This amount of energy is obviously a problem for the environment.

Yet, solutions to the energy consumption problem of BTC are starting to be tackled by miners using forms of renewable energy. A huge problem with even knowing if the above statistics are true and whether transitioning to renewable energy could be a long-term solution for BTC is that no one really knows how much mining of BTC is currently being done using renewable energy. BTC is so new that no concrete numbers can really be sourced, instead there is a lot of “guestimating” going on.

BTC mining and transaction authorization takes a lot of people and a lot of equipment. There are about one million people actively mining BTC and the amount of equipment and tech being used to mine BTC is only estimated but at this point in time it’s a lot! I know not very concrete but that absolute number is simply not known right now.

Now true believers in BTC who think of it as an asset like that of Gold do not think the labor being put to mining BTC is a problem. Just like back in the Gold Rush days, people did not think it was a problem putting a lot of people to work mining for Gold. If there is perceived value in something than time and energy is not wasted. The real question is, should we be putting value on a digital asset?

A lot of people express problems with BTC because it is a digital asset and not in any way tangible. Digital assets can be pumped and dumped and because they hold no physical existence, the people who are left with devalued digital assets are left broke.

Also, since BTC requires big players to take part in it like Elon Musk or Jeff Bezos so that the public becomes more confident in it, BTC users can start to idolize the bigger players. BTC is still so new in terms of tradeable assets and people rely on influencers like Elon Musk to stay invested with BTC because if he dumps all he has then the value of BTC will plummet and that will leave a lot of people high and dry. Therefore, people with weak moral convictions tend to idolize the big players who have the smaller players financial future in the palm of their hands. This scenario does exist in almost every other form of currency as well, it is just more prevalent in Crypto.

BTC can play a role in people using their governments fiat currency less and less and this could lead to destabilizing consequences within government. If people would rather invest in BTC which is decentralized over bonds issued by their own governments than those governments may have trouble building roads, schools, and hospitals. People with more libertarian leanings may not think this is a bad thing but people with more reliance on the government who do not have access or the means to access BTC may not be approving.

NOW, for the positive.

Going off the last point in the negative side of things, decentralization is music to some people’s ears. People all over the world are sick of elites and governments printing money, causing inflation, and playing favorites with government-controlled currencies. Decentralization seems to be the solution to this overwhelming global problem.

BTC is extremely secure and the blockchain technology (Click link for explainer video) comes close to eliminating any potential fraud.

Some people have said that because the blockchain is completely anonymous that it helps criminals who engage in things like drug and human trafficking. This is not actually the case since the blockchain is only pseudonymous and there are relatively simple ways to trace transactions back to their sources. Cash is still king for criminals if they don’t want a trail.

There is a limited number of BTCs available for circulation for the rest of time itself thanks to the way it was invented and the algorithms that power it. A limited number of an asset is a pretty simple way to keep inflation at bay. Great article here on what happens when the total number of BTCs, 21 million, are put into the market.

The energy consumption aspect of BTC is probably the most alarming followed by the idolization and digital asset aspects of BTC. Neither of these are hard lines in the sand that would make investing in or using BTC off limits from a moral perspective according to C3, but they are things that the individual should think and pray about.

Another point worth mentioning here is that some people out in the world believe that whenever you make money on something that means someone else is losing money. This idea can be true or false depending on how you look at it. For example, say you sell a stock or piece of BTC that you have held for the last 3 years. Someone else buys this asset from you. The person who bought it may think that it is going to go up and you may think it is going to go down, hence why you sold it. One of you will be right and one of you will be wrong. Therefore, there will be a winner and a loser. However, maybe you sold this asset because you wanted to go on a vacation or add an addition to your house or just treat your spouse to a nice dinner. The value of a nice dinner or an addition to your house outweighed the potential value of holding the asset longer. For the buyer, the value of the potential returns of the asset outweighs the nice dinner or house addition. The market is only a zero-sum game if you think in terms of the actual asset. But if you think in terms of value than it is most certainly not a zero-sum game. Also, just because you sold something to somebody that you think is going to lose value does not therefore make the selling of the thing immoral. You could be wrong and there is humility in the fact that no one has a crystal ball. Plus stopping someone from buying something they want to buy with their money would itself be morally problematic. Remember, we are not talking about snake oil here; we are talking about complex assets that huge majorities have decided to value. There are a lot of nuances to this way of thinking, and we are not professional philosophers here at C3, but we do encourage everyone to spend some time in prayerful contemplation about these ideas.

At the end of the day there is no perfect currency that exists, they all have their flaws. Fiat Currencies are too easily manipulated by Governments and cause inflation and economic depressions. Gold is a limited and impractical asset that cannot be traded easily. BTC takes way too much energy and is too young to be thought of as stable. Cash, even when backed by precious metals, is too easily used by criminals, and relies heavily on major players like the government who are easily corruptible. The barter system is laughably impractical in the global environment we now live. C3 believes that assets in themselves are not evil. The evil comes in when you look at what assets fund and promote and what individuals do or don’t do with the wealth, they accumulate from a given asset. Bottom Line, no currency, no asset, no company is perfect, but we owe to our neighbor to be mindful and prayerful about what assets and currencies we choose to use.

This little post is very brief, and we hope it gave you some food for thought. As always, we encourage you to spend time in prayer with our Lord Jesus Christ and speak with friends and family before making any major financial decisions.