The Morality of Day Trading 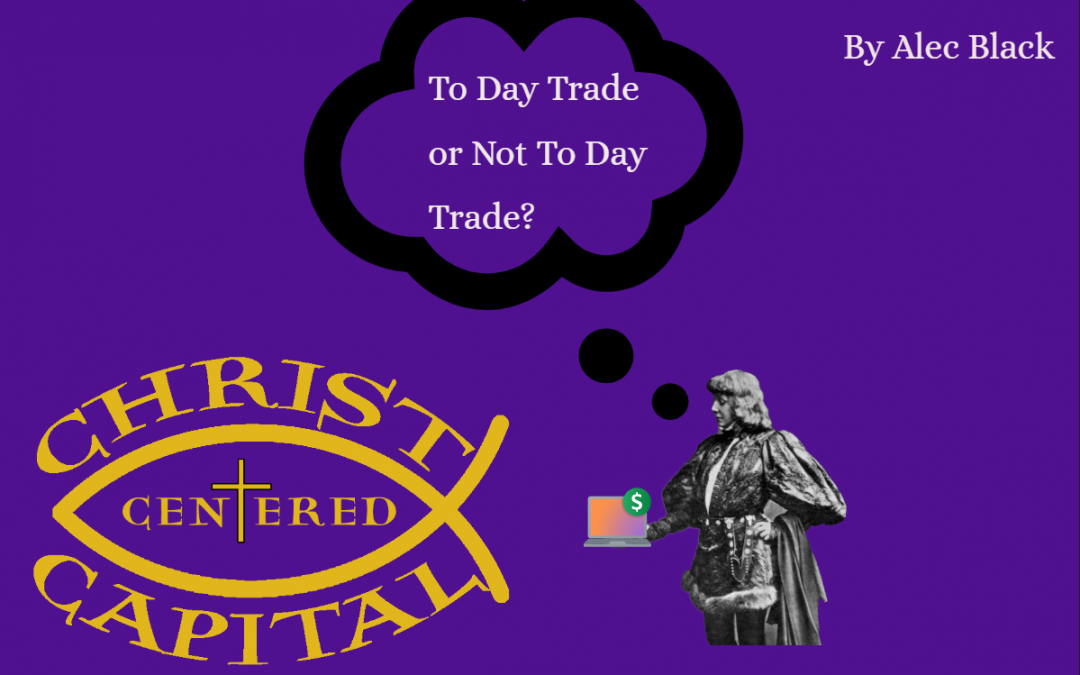 To day trade or not to day trade, that is the question!

The investment market is a complicated and intimidating place. It is just as easy to make money as it is to lose every dollar you invest (C3 hopes the latter never becomes reality for C3 Subscribers). As a result of this variability, many different methods for investing have been created, and among the most talked about in the public eye is Day trading. Many individuals make their living off day trading, and just as many gamble away their savings due to risky bets in the market. The viability of day trading is a topic that is typically the topic of heated debate but this is not the topic of this article; instead, we will be discussing the morality of day trading, as it relates to Christian values.

To begin, let us clearly define what day trading means, as well as a few other noteworthy definitions:

Now that day trading is defined (At a very broad level), the morality of the method can be discerned, starting with the potential immorality day trading brings.

The primary source of immorality in day trading, similar to investing overall, is greed. As mentioned in the Bible in relation to greed, “Wealth gained hastily will dwindle, but whoever gathers little by little will increase it” (Proverbs 13:11), and day trading is the embodiment of ‘wealth gained hastily’. The gain from day trading is derived entirely from market volatility, taking advantage of a usually bad situation for a given company. Unlike normal work, day trading provides profit without adding any actual value to the world or one’s community. However, there is still work needed to make money via day trading, and some may argue that skill and intuition is required as well. Overall, the issue of greed in day trading raises an important question: Are the profits of day trading actually ‘earned’? Unfortunately, there is no clear answer to this question, and it is dependent on the individual to decide for themselves if day trading creates earned profits. But the idea of ‘earned’ profits is not the deciding factor on whether an act is greedy. Greed, as a defined sin, is just as opaque as the previous question on earned profits of day trading. The act of acquiring wealth is in and of itself not inherently greedy; the working man is not greedy if he works to feed his family, and the church is not greedy for asking for donations to fund its operations. What makes an act of acquiring wealth greedy comes from the intent of the wealth acquired, not the act itself. If someone wants money purely to bolster their own wealth, then that person is greedy. It is therefore not possible to call the act of day trading inherently greedy, as it relies on the context of the individual investor and their purpose for the gained wealth that invokes the sin of greed.

The second aspect of immorality caused by day trading is the investment into immoral companies. But this, too, is not a clear-cut case of immorality. Day trading typically involves the transaction of stocks on the public secondhand market; this means the stock has already been sold to an investor and so the individual is buying from another person, not the company. Due to this, the company does not benefit from the trading of their stock. One potential issue that may occur is the idea of ‘promotion’ from day trading immoral companies. For many day traders, the ideal strategy involves targeting high volume stocks or funds to trade, as the market activity surrounding these assets creates opportunity. By buying and selling stocks in immoral companies, the volume of these stocks will inherently increase, meaning that the company may receive greater (possibly positive) publicity by the media and trading community, which in turn benefits them. However, this is by no means a guarantee, and on an individual level, the additional volume added by day trading represents a miniscule percentage change in the overall volume of a commonly day traded stock. Currently, the stocks with the highest trading volume vary wildly in function; examples such as stocks like DiDi Global, a Chinese transportation company, and AMD, an American semiconductor company, and even ETFs such as iShares MSCI Brazil ETF, which is exclusively comprised of Brazilian companies, and VanEck Vectors Gold Miners ETF, a fund devoted to gold mining companies. These companies are common targets for day trading, and the morality of their practices are at best questionable, but their already high trading volume means that additional trades by an individual day trader are unlikely to draw more attention to these assets. Furthermore, day trading implies that the ownership of a given stock is incredibly short term and involves trades of size so small that the weight of ownership transferred is essentially nonexistent, which raises a question: If a day trader buys and then sells a single stock of an immoral company in under a day, does that extremely minimal ownership transfer responsibility of the immoral actions of the company to the day trader? Some savvy Christian investors, due to its small timeframe and minimal share of ownership do not think day trading immoral companies is morally wrong. The rebuttal to this argument would be…Sure, the direct evil is remote when day trading immoral companies, but if the entire ‘Christian’ population were to stop day trading (and trading in general) immoral companies, those companies would surely suffer at least in terms of publicity and possibly even financially.

To conclude, the act of day trading is not inherently immoral or moral; the intent of the trader, what they are trading, and the deepness of their moral convictions is what determines the morality. C3 believes time and money are better spent investing for the long-term and focuses should be put on moral companies rather than immoral ones no matter how remote the evil is associated with trading, but C3 does take a much stricter approach than most.

C3, where your morals meet your investments.