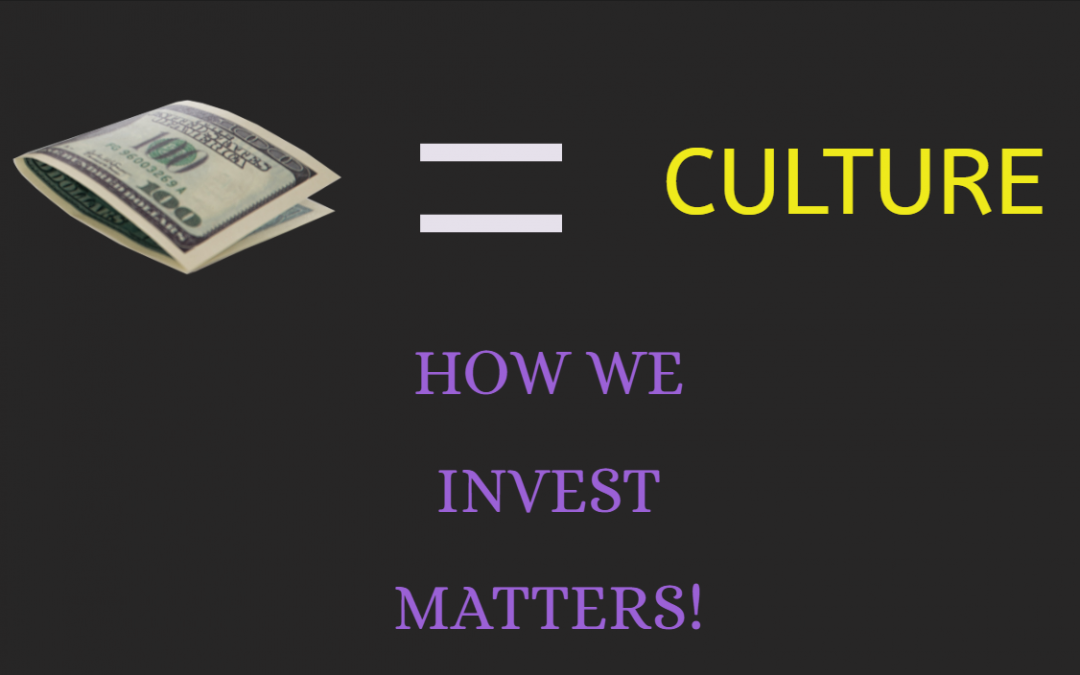 How your investments shape the culture

“Whenever you invest in something that means you want that something to grow in power and influence.” ~ Anonymous (Possibly St. Thomas Aquinas)

The above quote is the secret to effectively influencing a culture!

When we invest in something we of course do so because we expect a return on investment (ROI), but how does that ROI materialize? Well, if you are investing in the stock of a company an ROI is generated, plainly speaking, when the company is able to sell its service or product to more people, generate more revenue, minimize expenses, and incentivize more people to invest in the stock. This all of course is common knowledge, but what most do not think about is the influential power that this financial success of a company brings. When a company does well and their stock prices goes up, they start to develop a broader reach into the culture.

This increased reach into the culture can come in many different ways. The company could be generating enough revenue to where they can expand into different markets or start developing new products and services. When a company becomes successful financially, they have the ability to market themselves more broadly and palatably to the public. These are just some of the ways that a company can become more ingrained into society and culture when they do well financially (Stock price going up).

As an investor you would obviously want the company you are investing in to start selling more goods and services to more people. But the question becomes ‘at what cost?’  Let’s look at some real-world examples.

For the first example of how investing shapes the culture let’s look at Coca-Cola. The main product of Coca-Cola is of course Coke. This carbonated sugar water is highly addictive and loaded with things we all know are unhealthy for us. Coca-Cola would probably do very well for itself if it was a private company, but it does that much better since it is a publicly traded company. Coca-Cola is a notoriously woke company that has promoted not only its products but political agendas, and has done both effectively because of its financial success. This information should cause the investor to start thinking about a particular question. The question is not whether the Coca-Cola investor has played a role in promoting an unhealthy drink and political agendas, but is rather, are they morally okay with the role that they played? Coca-Cola and other organizations use funds received from the selling of their stock to grow their business and therefore grow their reach (AKA Influential Power). Do you as an investor want Coca-Cola to grow its influential power? Are you willing to pay the true cost in exchange for a nice monetary ROI?

The second example I would like to use is Amazon. Amazon is wildly successful and has produced a really nice ROI for long-term investors. Amazon has caused the demise of a lot of small businesses, reportedly treats its workers poorly, advocates for abortion, supports the Equality Act, and helped erect barriers to entry to the retail market by advocating for higher minimum wages. Amazon has a great business model and does extremely well for itself partly in thanks to investors who choose to buy and hold Amazon stock. With all this in mind, again, the investor must ask themselves if they are okay with playing a part in helping Amazon gain more power and influence in society.

The last example I would like to highlight has a bit more of a positive tone. Cameco is a company that specializes in Uranium mining which is crucial for nuclear energy plants. Maybe promoting nuclear energy and getting a potential ROI are things you could get behind because you think Nuclear energy is the future. If nuclear energy is proven to be more sustainable, greener, and cheaper than all other forms of energy, then supporting Cameco could be synonymous with supporting the common good. If this is the case, then investing into Cameco would be enticing from a moral perspective.

Quick aside here…All investors should be participating actively in shareholder meetings if they want to be a true moral investor. This is the case because non-participatory/passive investing runs the risk of reaping where one has not sown. Which is a big no-no in many moral world views. You can find more elaboration on this topic at www.ChristCenteredCaital.com.

The biggest trend in moral investing right now is ESG (Environmental, Social, Governance) investing. Many conservatives do not agree with the ideology of ESG investing but we can appreciate the principles behind it. The people who came up with and promote ESG investing understand that investing is one of the most powerful ways to shape a culture. Investing is probably only beat out by family unit ideology (how parents choose to raise their kids) when it comes to the most impact a thing can have on the culture. Publicly traded companies have one thing on the brain, and that is profits. Generally speaking, companies do not have deeply ingrained moral codes . The moral codes of a stock are dictated by LOUD shareholders and advocates. One ranting person on twitter can not make a lot of difference in the world today, but if that one ranting person teams up with a few more ranting people and they pressure a major company to adopt their values, then that major company can have an enormous impact on the culture. This ability that companies have to impact a culture comes from the power they acquire by growing bigger and more influential.