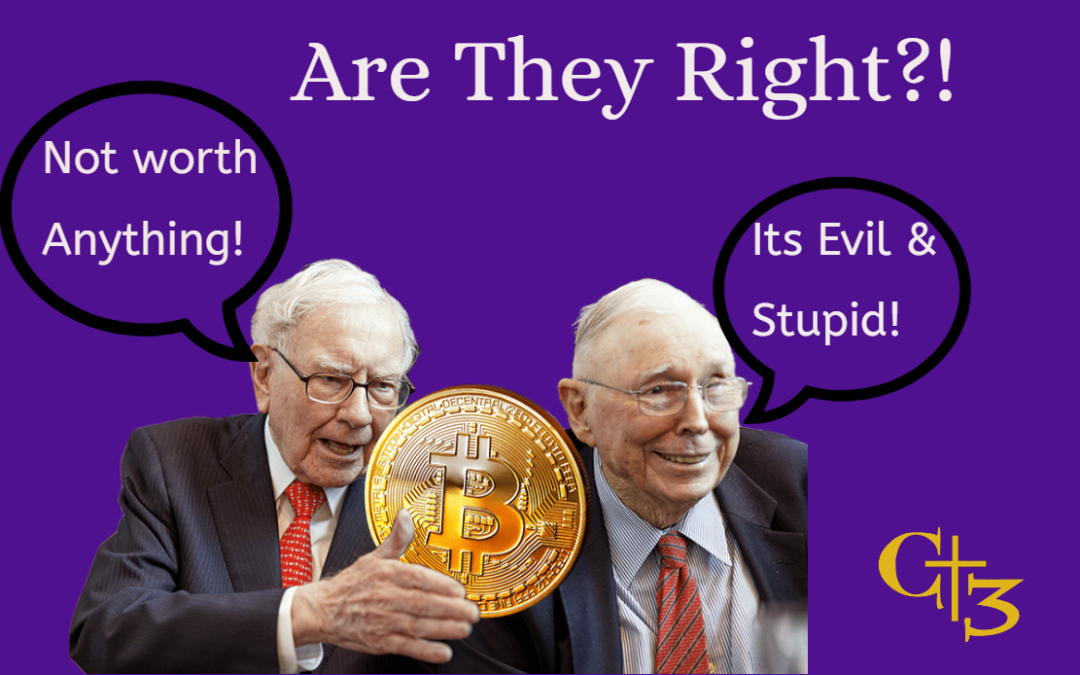 BTC was called evil and stupid by Warren Buffets partner Charlie Munger and Buffet explained that he would not purchase all the world’s BTC even if it was offered to him for just $25 (If someone is making that offer, we will bid $25.01 for it!!). So, why is the oracle of Omaha and his partner so harsh on BTC and Crypto in general? The answer is a bit nuanced, so let’s dig in!

Here at C3, we love nuance and research and reading between the lines. And when someone makes a comment that a particular asset is Evil then we are on high alert, because…well…that’s our job!!

Buffet is big on tangibles like Farmland and Housing because they produce crops and rent. Buffet does not like Crypto because he thinks it does not produce anything and he is kind of right. But guess what, Fiat Currency does not produce anything either!! Buffet and Munger are making a category error comparison. BTC is not comparable to Farmland, just like farmland is not comparable to Fiat Currencies. BTC is comparable to traditional methods of payment not tangible assets (At least not outright).

The USD is something that in of itself does not produce anything. It only holds value because people agree that it holds value, and it is backed by the US Gov. The USD is just pieces of paper with old dead guys on it. If Russia, China, and India (a huge portion of the global population) decide to divest from the USD then the value of the USD will plummet. Right now, the USD is king, but no king reigns forever except Christ. BTC and other Cryptos are just an alternative form of currency. It does not produce anything, and it only holds value because a group of people say it does, just like the USD or any other Fiat Currency. The difference is who the people are that are saying the currency has value. With the USD it is Governments and individuals, with BTC it is fewer government’s (El Salvador & Central African Republic use BTC) and individuals. Of course, the Governments supporting the USD are a lot bigger and, in a word, better than those supporting BTC, but who is to say that won’t change in the future.

The big BUT here is that with BTC and other Cryptos there is an additional layer of worth in the types of transactions you can make and how secure those transactions can be. Think of the decentralized and almost un-hackable nature of BTC Blockchain technology compared to the USD where people are always printing fake forms of it as well as using it for black market purchases. Now, of course BTC has been used for black market purchases, but make no mistake, the criminal underground prefers cold hard cash.

Buffet and Munger are probably a little timid when it comes to BTC and Crypto because it does have the ability to undermine the current financial industries status quo. BTC is already being accepted as a form of payment among major retailers in the US and a few financial firms are allowing Crypto investing in their Retirement accounts and all of this could cause some chaos in the financial world as it struggles to pivot into the DeFi space. Buffet and Munger have a lot of capital staked out in the traditions of the investment world and Crypto could disrupt that. Therefore, C3 understands the reservation that the heads of Berkshire Hathaway have! They are in a way legitimate, but to say that Crypto has no use or is stupid and evil is a bit dramatic and verifiably wrong. Crypto has its flaws but its bright points of being decentralized, secure (Think: Legitimate Cryptos like BTC & ETH), and easily transferrable across different countries are obviously highlights that should not be ignored.

People need to stop thinking of BTC as an investment comparable to Farmland and start thinking about it as a legitimate replacement or compliment to fiat currencies. Here at C3 we are bullish on Crypto for the long-term but we by no means think you should make Crypto most of your financial portfolio. Crypto is still new and a lot needs to be learned about it and problems need to be solved before global adoption takes place. We just think Munger, and Buffet are a little bit off in their analysis here. Then again, they are a LOT more successful than us when it comes to finances!! But hey, maybe when we are in our 90’s we will be saying the newfound investment taking the world by storm is stupid and evil too. Time will tell!

As a reward for reading this whole article, check out some below assets that C3 has turned up in this weird time….

Tesla (TSLA) – I know big shocker here! With Elon buying Twitter and investors thinking that he is spread to thin between the EV powerhouse and the Blue Bird, some analysts with opposing views think TSLA is now at a very favorable discount. Plus, TSLA killed it in their earnings delivering over 300,000 vehicles in a time where most companies were crippled by supply chain bottlenecks. TSLA used to be a RED rated company for C3, but it has since changed its tune on a few things and is creeping into Purple rated territory. Tesla is a mixed bag morally. They are supporters of the Equality Act which is a pro-transgender piece of legislation, but they also donate to support the Sheriff’s relief foundation and various local fire departments. Tesla and the Musk Foundation also support STEM education in a big way.

Arista Networks, Inc. (ANET) – ANET sells ethernet switches and routers used in massive data centers and huge campus networks. They are good at what they do, and they focus on what they do. The only reason they are not a Gold rated company is because a big portion of their revenue comes from Microsoft and Meta Platforms (Meaning ANETs two big buyers are part of the FAANG group that gets horrible ratings from C3). ANET is getting favorable ratings from financial analysts as of late because they could make acquisitions in adjacent markets that could add to already stellar growth.

SolarEdge Technologies (SEDG) – An energy Technology company that provides inverter solutions. This is how solar panels maximize power generation. Recent policy implementations and potential policy incentives are why some analysts are bullish on SEDG. SEDG does nothing nefarious from what C3 has researched and it of course performs well regarding energy conservation.