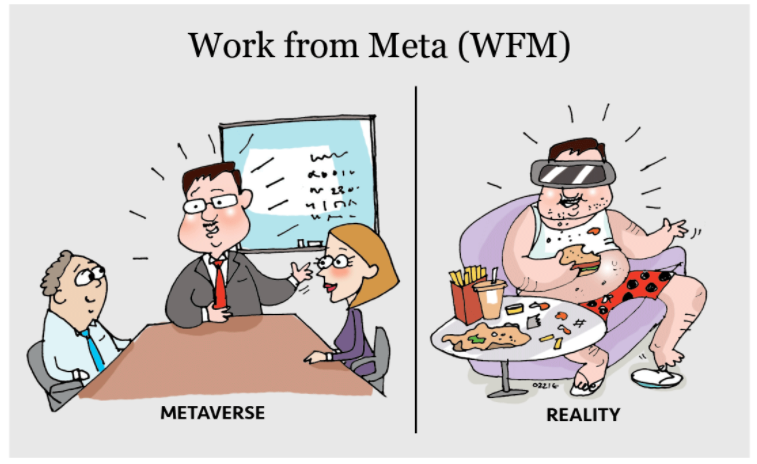 Facebook is changing its name to Meta, Microsoft is launching its Mesh network and other tech giants are jumping into what is now being called the Metaverse. The Metaverse is essentially virtual reality. If anyone has ever seen the movie Player One, then that is kind of what Mark Zuckerberg and others are thinking about when they start talking Metaverse. Tech giants and other companies like Nike, various real-estate firms and sports leagues are planning on spending billions of dollars and quite possibly trillions over the next couple decades on flushing out this Metaverse and acquiring pattens. Facebook is even planning on purposely incurring net losses over the short term because of massive amounts of capital being put to Metaverse related R&D. If you can stomach the creepiness, then watch this video of Mark Zuckerberg explaining META.

The Metaverse is something that is going to make a lot of people rich, but it is by no means something that a Christian should support. The Metaverse is going to take away authentic life from so many people because of its addictive nature. Human beings are already becoming extremely averse to risk and sufferings, even to the point of cowardice, and this is without the crutch of advanced forms of virtual reality. Oh, how the old cliché of “is not every blessing a suffering and every suffering a blessing” been forgotten. Some people may think I am just doing a chicken little impersonation of being an alarmist, but come on does anyone think this advanced form of virtual reality will be good for our souls? It is tough to give statistics on effects the Metaverse will have on us because any thing that is out there right now is just computer modeling or educated guesses. But come on, God gave us common sense…let’s try and use it for once.

Now there are going to be a lot of ways to make money and gain power and influence when this Metaverse is in full swing and make no mistake it will one day soon be in full swing. Chief among these ways of making money and gaining power and influence will be data mining on the users of the Metaverse. Mark Zuckerberg and other tech leaders are always trying to assure you that your privacy will be intact while using the Metaverse, but this is utter nonsense. Zuckerberg himself explains that you will never have to save anything after using the Metaverse because it will save it for you. Yet, we are supposed to believe that are data will be kept private? Doubtful to say the least!

One other way that the Metaverse is going to bring in the green is that of “adult Content.” Virtual reality and adult content are going to be able to capitalize on a potentially very lucrative partnership that will cause even more societal ills than either has caused by itself thus far. As if this wasn’t enough just think about the gambling and various black-market activities that are going to take place in the Metaverse.

The only good that I can possibly think of coming from this is that absolute poverty may be lessened due to the massive amounts of wealth that the Metaverse will create. But this is even a long shot given the addictive nature of the Metaverse crippling people to the point of extreme dependency and the wealth being created will be centralized to just a few key players. I am all for the virtues of capitalism, but capitalism has its limits, and those limits are expressed through monopolies growing increasingly powerful.

None of the stocks on the list below get the C3 stamp of approval. They are all going to be profiting off of and heavily promoting the Metaverse and that is an automatic no from us here at C3. However, if you have the massive amounts of capital and influence, maybe you can get in on these companies and try and sway them away from this depravity. Just know that this effort will take Billions!

Two quick notes to keep in mind as this Metaverse becomes reality (Take that statement for what you will).

Stocks that will benefit greatly from the Metaverse coming into existence. Again, none of these are recommended by C3.