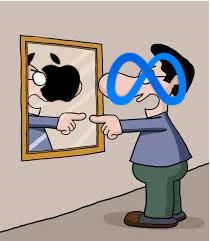 First off, let’s dive into the market news in this insanely volatile time.

Vanguard misleads investors – Vanguard did not warn investors who were holding funds designed for retirement accounts in regular taxable accounts. These investors got hit hard with tax bills and they really felt that Vanguard guided them down a costly path. Read more on this story HERE.

META blames Apple – Meta/FB had a historic fall last week and they are blaming Apple for letting the smart phone users opt out of Facebook Tracking. Meta may be right about their fall being partly Apple’s fault but the real reason for their fall is that they lost users for the first time in FB history. Of course, the Apple Tracking option probably had something to do with it. Apple simply asking the question may have been a wakeup call to some social media users. Meta may not matter to some BRI investors, but it should. Sure, a BRI investor should not hold any Meta stock, but Meta is so big that when it falls it has a ripple effect on the rest of the market (as any company with over $33 Billion dollars in revenue would have). Even small businesses are struggling to cope with the Apple option to not track. It wasn’t just the big tech companies who relied on data tracking to market more efficiently to customers.

We know NOTHING! – A weird idea that is almost fact is that the overall market/the public usually doesn’t know it is in a recession until the recession is at least 6 months old. Keep this in mind when you listen to people who predict things with certainty regarding the market. Also, recessions usually provide us with a great buying opportunity.

No passive income tax on Crypto?! – The IRs may not decide to tax Crypto holders on passive income. Basically, the IRS is deciding that it may not tax your crypto until you decide to cash it in for a new house or car or something like that. Read a full story on this HERE.

Airline Merger – Spirit and Frontier are looking to tie the knot. Both are economy airlines, but they face opposition from the “Big is Bad” Biden administration. The Merger is worth about $6.5 Billion. Both Frontier and Spirit did not turn up any red flags during the initial C3 screening process but no deep dive into their ethics has been conducted thus far. Read up on the merger HERE.

Hookup Culture is Booming (Depravity always is) – “Dating” (that term is being used very loosely) Apps like Bumble are making a buzz among the market because they are expanding into new demographics and geographic locations (Europe). Bumble just acquired French dating App Fruitz and the sales for Bumble are right around $200 Million. No stock in this industry will ever be recommend by C3 but we wanted to mention it because it is currently a huge cultural and financial story.

The Nail in Cable TV’s Coffin – Live Sports are the saving grace of cable television and that may not last. With the most watched sporting event of the year, the Superbowl spreading the wealth to certain streaming networks. NBC’s streaming network Peacock is just one of many that will give subscribers access to the big game on Sunday. Interesting side note, 30 second Super Bowl ads are at record highs of $7 Million a pop.

Next, let’s talk about what stocks were popping up on radar this week.

Okay, I know that was a lot of bad companies, but we do have one company that passed our ethical screening this week that also had promising financials. That company is listed below, but you have to be a subscriber to see what it is. Also, if you are looking for even more companies that we think have financial potential and passed our ethical screening process then go download our NEW MOCK PORTFOLIO. This new Mock Portfolio has only been around for one week and it is currently up 2%.