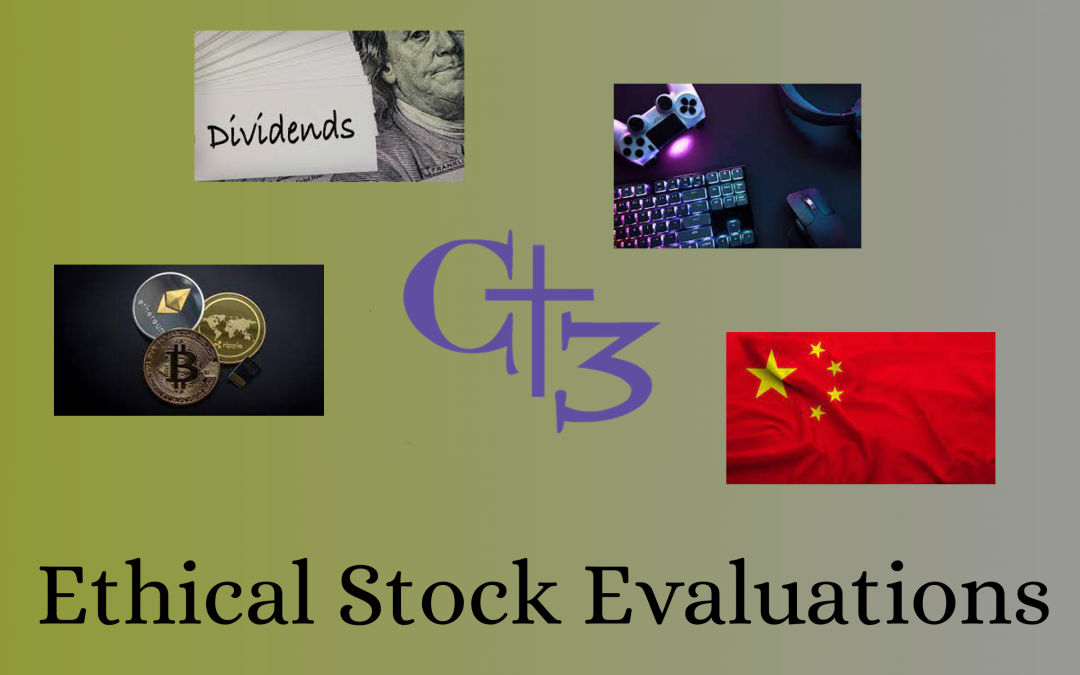 The C3 Financial Outlet Monitoring Process turned up a few assets this week that have become “buzz worthy.” These assets are listed below and have been given ethical ratings by the C3 team. If you are not a C3 subscriber and cannot see the list of assets, don’t despair! You can gain access by clicking “Subscribe Today” and it only costs $7/month. That $7/month will not only get you timely ethical investment information every week, but it will also help C3 support some amazing Christian Charities (C3 gives away 50% of net profits every month).

The first batch of companies in this week’s report are all owned by China. These companies are all “Buy the Dip” plays because Chinese companies took majors hits over the last week because of the shutdown happening in the country due to Covid cases. All four companies are well known stocks and have been a part of many well diversified portfolios. The problem is three of the four companies (Excluding Yum China) have all started the recovery process already. Many analysts were all doom and gloom when they initially dropped, and this just goes to show you that no crystal ball exists.

Tencent (TCEHY) – China Owned Company & a whole lot of bad– This Investment holding company is involved in everything and when a company is involved in everything it usually means that the company is doing well financially and doing poorly when it comes to morals. Tencent is no exception. Tencent is involved with a lot of plain out bad investments. These include emotionally harmful social media channels, addictive and explicit video games, and some other qualities that are off putting to the Christian Conscience. Quick Note, Chinese companies never pass the C3 ethical screening process simply because they are Chinese companies. This is not because C3 holds any thing against Chinese people. It is solely because it is almost impossible to do work in China without the corrupt CCP having a hand in the cookie jar. C3 refuses to support or fund a government that is actively committing genocide and forcing citizens to get abortions.

JD.com (JD) – China Owned Company, Pornography – this Chinese E-commerce company is another big player in the east and at home here in the West. Their biggest knock besides being Chinese owned is that they have a hand in producing and selling pornographic content.

Yum China (YUMC) – China Owned Company – YUMC (Chinese Kentucky Fried Chicken and Pizza Hut) is the one Chinese company in this group that has yet to make a real rebound, but they also did not fall as much as the others. YUMC produces unhealthy foods and absolutely works with the CCP at some levels, but they are not an egregiously bad actor regarding Christian Moral Investing.

Alibaba (BABA) – China Owned Company – The Amazon of the East is exactly what it sounds like and why it has been included in so many different portfolios. Just look at the average volume on BABA (25.1 million) and it will give you the idea of how big BABA is not just to the Chinese economy but to the Global economy. BABA does not really participate in the “normal” illicit activity that you get with US companies, but given that is Chinese owned, and it is massive in size means that the CCP have a hand in what BABA does and that is reason enough for some Christian Investors to look elsewhere for investments. Still want to invest in the retail space, ETSY has received positive reviews from the C3 team in the past.

The next few stocks are random that had some sort of consensus among all the financial outlets that we monitor on a weekly basis.

Block Inc. (SQ) – LGBT Legislation, Abortion Legislation – it may be safe to say that any company owned by Jack Dorsey will not get a positive review from the C3 ethical screening process. Jack’s new endeavor with Block (Square, Cash App, TIDAL, and the like) is following in the footsteps of twitter in terms of supporting LGBT initiatives and Abortion. This global technology company has all the potential in the world but faces steep conversation from PayPal, who has been ramping up all arms of their business as of late. However, the things that Block supports are just too staunchly against Christian Values.

Unity Software (U) – Abortion Legislation – Unity Software keeps popping up on our Financial Radar mostly because analysts across the board are bullish on Unity because of their potential Metaverse play. Unity develops gaming software and real-time 3D content for phones all forms of electronics. This means they are positioned well to paly a giant role in the coming metaverse/web 3.0. However, the reason for their financial success, like most companies, is also the reason they do not pass the C3 ethical screening process. Unity’s involvement with the Metaverse is not the deciding factor on why they got the RED rating. That deciding factor was the support and promotion of Abortion Legislation.

Nvidia (NVDA) – Nvidia just keeps coming back. You can read our latest write up on them HERE. For those who do not know, the reason companies appear multiple times in our reviews is because we curate information from dozens of financial outlets and if any one asset has some consensus among the different outlets, we put it into our revies. So, essentially, Nvidia just keeps getting recommended by third party financial influencers, so C3 keeps including it in our weekly and monthly reports.

F45 Training (FXLV) – The Gym craze started in Australia and significantly owned by Mark Wahlberg investment group is skyrocketing! This intense fitness training group class model is conducted in person and franchises are popping up everywhere. They are a gym that is more focused on being the best franchisor then they are at being the best gym, and this focus seems to be paying off. Only time will tell if F45 is just a fad or if it is here to stay and grow for the long-term. Financials aside, there is nothing that turned our heads during the ethical screening process on F45.

Sabine Royalty Trust (SBR) – Royalty and Mineral production and mining is the name of the game for SBR. They have been being getting the buzz as of late due to their dividend yield of 6.9%. high dividend stocks are all the rage with inflation on the rise and the market flirting with a recession. Not everything is known about SBR (Take a look at their website and you will see why) and what their mining operations look like, but C3 saw no red flags.

Main Street Capital (MAIN) – another nice dividend play that has been getting some buzz from analysts. MAIN is a Debt & Equity financing company for middle-market companies. MAIN has beat the estimated earnings the last few quarters thanks to some good decision making on what startups they chose to finance. Not all the companies that MAIN works with our C3 friendly, but a lot are high-quality companies that do support the common good. Check out the full MAIN portfolio HERE.

Skillz Inc. (SKLZ) – SKLZ is a mobile gaming platform that gamers all over the world love. You can play addictive games like solitaire, virtual pool, virtual bowling, and countless others. SKLZ has been popping up in our curation process for a while but never had the consensus to be included in one of our reviews, and even now it just barely made it. Most analysts do not recommend opening a new position in SKLZ right now but the recent uptick of 9% in the stock price has made some analysts take a more bullish view. The earnings have not met expectations in the last couple quarters, but SKLZ is able to benefit mightily from the Metaverse if they play their cards right and can get their tech to integrate with other Metaverse positioned companies.

Coinbase Global (COIN) – C3 has reviewed this Crypto company before, and they always get a positive result from our ethical screening process. This is not because they are a Christian company or anything like that, but it is because they actively stay out of politics and social issues and focus on business. This is all we can really ask of a company in a secular world. The reason COIN is showing up on the C3 financial radar again is because of the new EO from the Biden administration. This EO has people thinking the future for legitimate cryptos is bright. And if cryptos future is bright then so are the futures of crypto wallets.